Plateau Perspectives has been working on the frontlines of conservation and community development for the past two decades. Real-world implementation has been further supplemented by academic research and participation in multi-stakeholder development dialogues.

Now, the inaugural issue of “Development Issues” summarizes and discusses the major significance of biodiversity for people, its essential role for sustainable mountain development. Future issues in this policy brief series will also include topics such as climate change, territories of life, mountain tourism, culture and sustainability, educational technologies and development, and more.

Plateau Perspectives has launched a new policy brief series that aims to raise awareness of established as well as emerging and ‘horizon’ development issues in community-based conservation and sustainable development. The inaugural issue of “Development Issues” is entitled Biodiversity is essential for human development (Issue #1). 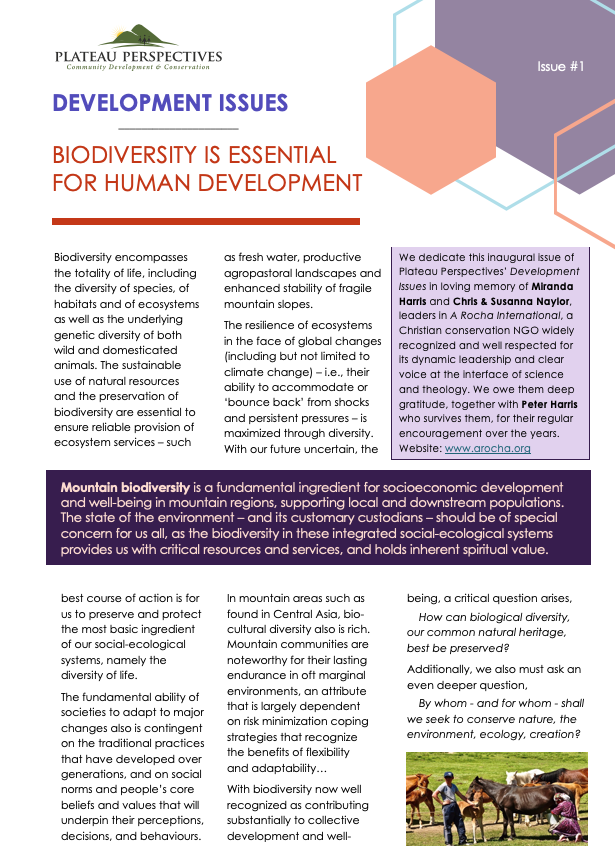 The inaugural policy brief focuses on the significant value of biodiversity – both intrinsic and utilitarian – and the imperative to protect biodiversity (i.e. nature, ecology, environment, creation…). Such imperative comes from widely and often deeply held belief systems and world views (not just religious) as well as from direct observation and appreciation of the many benefits that are derived from biodiversity for local communities and more distant (often urban) downstream populations. Conserving biodiversity thus contributes to – and indeed, is essential for – human development and well-being, locally and globally.

The core focus of this new series is mountainous regions of the world, especially in greater Central Asia. Each issue in the series will bring special attention to a new or complementary development issue, pertinent for human societies as well as for local and regional ecologies, that is, mountain social-ecological systems.

The full complement of Policy Briefs is available here.

In addition to providing syntheses on key development issues on the basis of Plateau Perspectives’ own experiences, through the projects and research conducted by its field staff as well as the expertise and experience of its directors, trustees and advisors, we also welcome suggestions for future contributions to this Policy Brief Series from other researchers and practitioners engaged in community-friendly development and conservation, with special attention given to contributions about regions and contexts overlapping with our work undertaken to date. All contributions should include a summary of the key development issues, provide relevant background along with major recommendations, and direct readers to pertinent literature – aiming to improve development policy and practice.

We expect the audience to be varied and include government and non-government partners alike in the geographies where we work.

No location for this project yet.