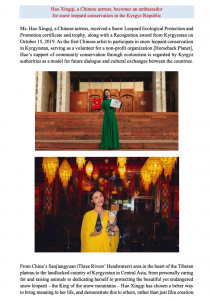 Translation/adaptation of an article recently shared on social media across China about an ecotourism project trialled in Kyrgyzstan in October 2019, organized by Horseback Planet Society (HPS), Plateau Perspectives (PP) and other partners… (original article is here)

In ‘The Secret Life of Walter Mitty,’ actor Sean Penn plays a photographer waiting for snow leopard to appear between the mountain ridges. He called snow leopards “ghost cats” and also noted that “beautiful things don’t ask for attention.” It is hoped that with renewed efforts to protect the snow leopard, these spirits of the snow mountains can have an enlarged living space in the world.

Snow leopards are listed in the Kyrgyzstan Red List of Wildlife Species. Additionally, it is clearly stipulated that anyone who poaches an animal in the Red List will incur a fine of 1.5 million Kyrgyz som (around 150, 000 CNY or $21,500 USD).

Snow leopard is a rare species worldwide, listed as ‘Vulnerable’

In Kyrgyzstan, the snow leopard is regarded as a patron of warriors, standing for beauty, strength and freedom. In Bishkek, snow leopards are printed on its city flag and emblem. There are also many decorations with snow leopards in the local market. 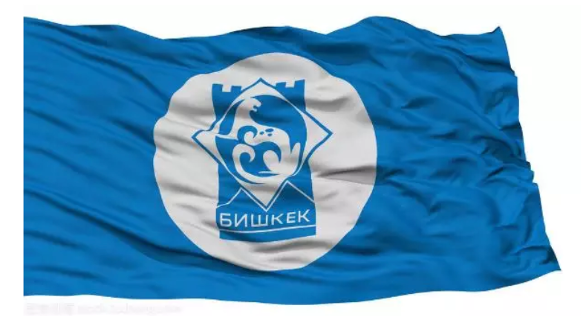 In 2013, the Global Snow Leopard Conservation Forum was held in the capital city of Kyrgyzstan. At the forum, the 12 Asian countries where snow leopards are distributed signed the Bishkek Declaration on snow leopard conservation and established October 23 as the annual International Snow Leopard Day.

According to research, less than 7,000 snow leopards exist worldwide, with 60 percent of them in China, and they are thus listed as ‘Vulnerable’ on the IUCN Red List.

According to the Snow Leopard Trust (SLT), there are between 3,500 and 7,000 snow leopards remaining in the wild, worldwide. The approximate distribution is as follows:

In July 2018, the Snow Leopard Trust posted a video showing snow leopard cubs captured by cameras installed in the Sarychat-Ertash State Nature Reserve [also see a blog about field work here, and recent news here]. The reserve was established in 1995 in Issykul oblast (province) to protect the unique natural ecology and rare and endangered animals and plants in the greater Issykul Lake region. 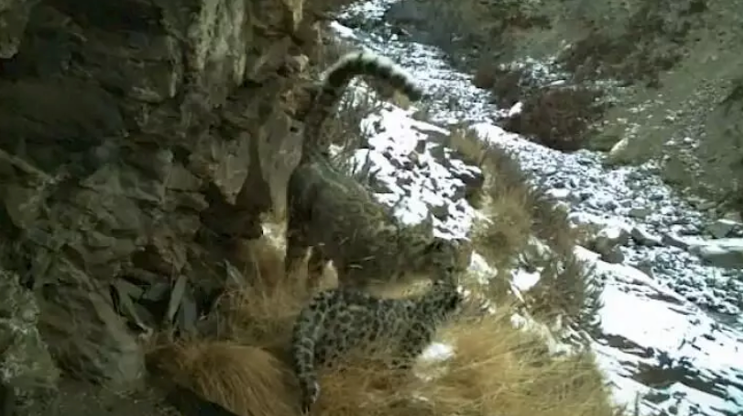 Hao Xingqi, a Chinese actress, becomes an ambassador for snow leopard conservation in the Kyrgyz Republic

Ms. Hao Xingqi, a Chinese actress, received a Snow Leopard Ecological Protection and Promotion certificate and trophy, along with a Recognition award from Kyrgyzstan on October 15, 2019. As the first Chinese artist to participate in snow leopard conservation in Kyrgyzstan, serving as a volunteer for a non-profit organization [Horseback Planet], Hao’s support of community conservation through ecotourism is regarded by Kyrgyz authorities as a model for future dialogue and cultural exchanges between the countries. 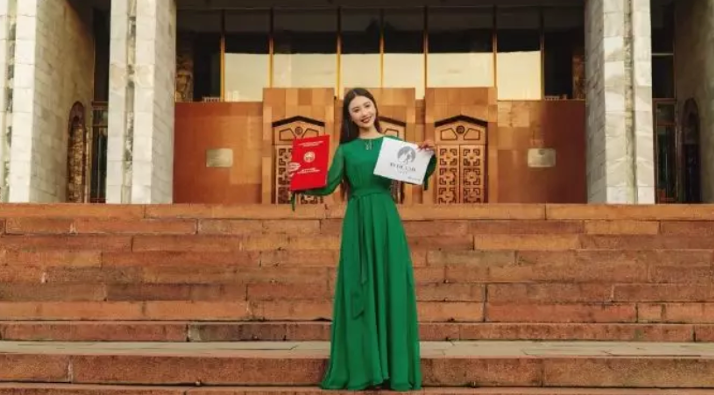 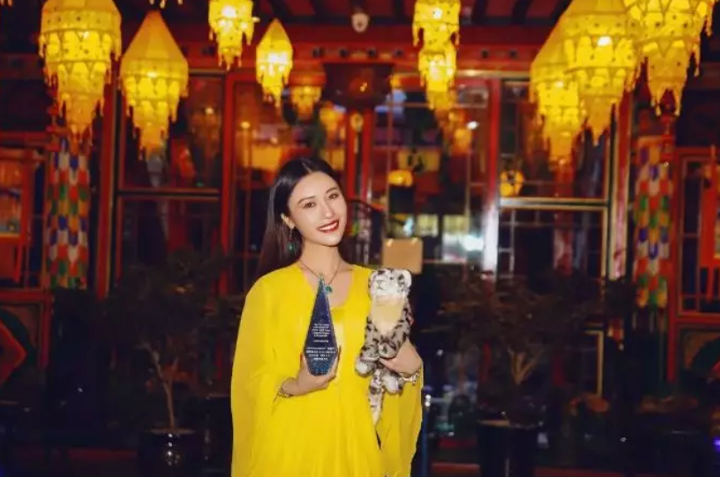 From China’s Sanjiangyuan (Three Rivers’ Headwaters) area in the heart of the Tibetan plateau to the landlocked country of Kyrgyzstan in Central Asia, from personally caring for and raising animals to dedicating herself to protecting the beautiful yet endangered snow leopard – the King of the snow mountains – Hao Xingqi has chosen a better way to bring meaning to her life, and demonstrate this to others, rather than just film creation.

Ms. Hao told us that when she first travelled to Tibet a few years ago, in addition to seeing and experiencing traditional and exotic customs, she also witnessed some cruel killings… It was this experience that inspired her. She says, “I simply wish to protect animals from getting hurt, so they can peacefully coexist with humans.” By chance, Xingqi learned about the snow leopard conservation project supported by ecotourism in Kyrgyzstan. “I chose to take this opportunity to learn valuable ideas and strategies from international experience, which may be helpful for me as I seek to promote public welfare back in the Sanjiangyuan area, in Yushu and in Tibet, back in China,” she said. 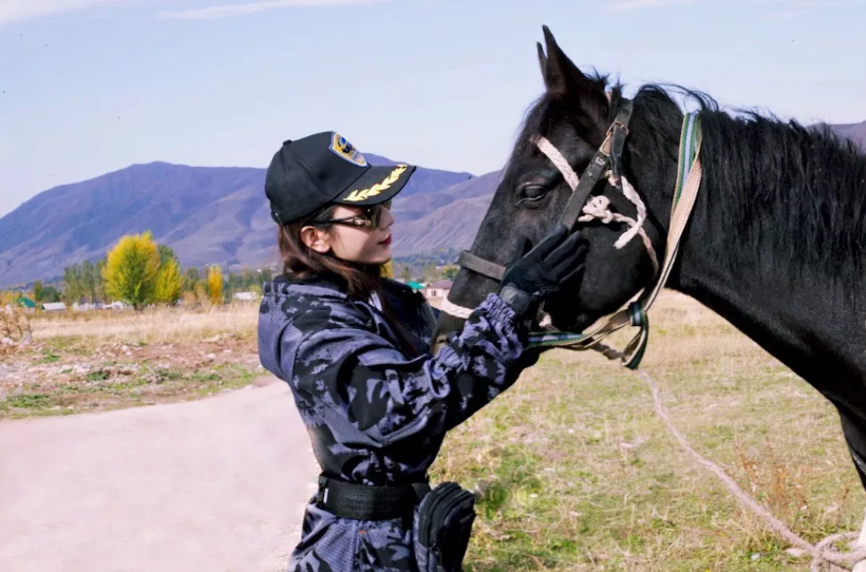 While the Issykul Lake region is beautiful and romantic, especially as the autumn leaves are in full colour, the main focus of Xingqi’s attention, her excitement, and furthermore her increasing sense of responsibility rests with the fundamental question of whether, and how, she can best promote conservation of this species of global interest, the snow leopard, by means of ecotourism and in partnership with local mountain communities.

Most certainly, she and the other members of the training camp and study tour are only followers, and the main “guardians” of snow leopards are the local community rangers. Yet she senses that she has an important role to play and now is endeavouring to inform the whole world about the mysterious and beautiful big cat, the rare and endangered snow leopard, and the ways through which we can protect it and its mountain habitats.

Recognizing the role that Ms. Hao can play as “snow leopard conservation ambassador” in China, just as Angelina Jolie is doing for the conservation of this wonderful species elsewhere, the Kyrgyz government was glad to award her recognition and encourage her to further develop her leading role in Chinese society and promote friendship ties. 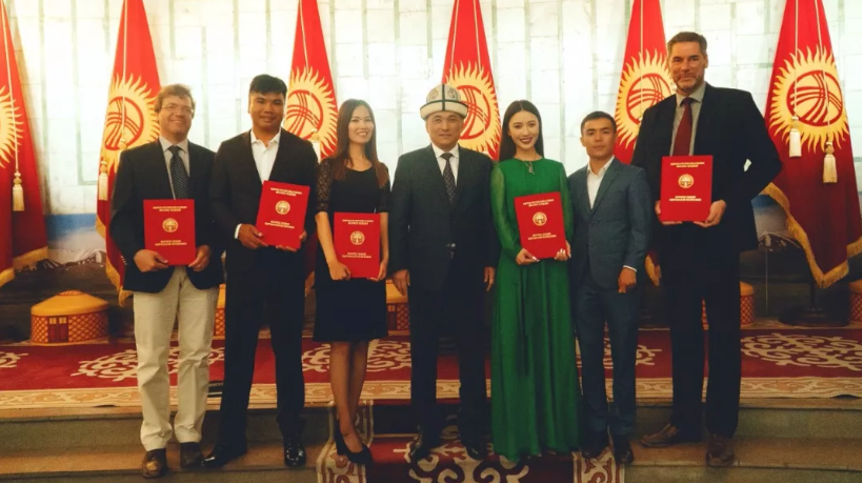 For all the above reasons, Hao Xingqi said that this is not only a new experience in her life, but it also brings to her a deep sense of responsibility. “In the future, in addition to continuing to support ecotourism, snow leopard conservation and cultural exchanges between China and Kyrgyzstan, we will also pay more attention to domestic ecotourism and snow leopard conservation activities – in particular in Yushu Tibetan Autonomous Prefecture and the Sanjiangyuan region [editor’s note: the Chinese term ‘Sanjiangyuan’ refers to the vast headwaters of the Yangtze, Yellow and Mekong rivers] including the shooting of documentary films and developing educational materials on the theme of environment protection,” she said. “After all, development of conservation approaches for protecting the snow leopard and its ecosystems is also promising in China, and I feel compelled to devote myself to conservation and development of the motherland.”
Sources:

In October 2019 Ms Hao Xingqi travelled from Lhasa, China, to Kyrgyzstan to join a small team led by Horseback Planet Society and Plateau Perspectives with the aim to strengthen community conservation in the Tianshan Mountains – focusing on the snow leopard and its montane ecosystems – through development of ecotourism. Other partners in this project included Ilbirs Foundation and Araketke-Bereket, along with the participation of representatives from CAMP Alatoo, UNDP Kyrgyzstan, Global Snow Leopard and Ecosystem Protection (GSLEP), and others, at the launch event.

Starting with a project launch meeting at Ololohaus in Bishkek, the ecotourism-centred development project focused on strengthening partnerships with communities in the Lake Issykul region. At the end of the study tour, the project culminated with an award received from the White House for contributions made toward promoting Kyrgyzstan abroad, advancing the development of community-beneficial ecotourism, and strengthening Chinese-Kyrgyz friendship ties.

Ecotourism has three main aims: (i) to contribute in tangible ways towards conservation outcomes, (ii) to benefit local communities, and (iii) to raise environmental awareness and advance education and a range of professional capacities for all ecotourism partners.

A film has been made about this project and will soon be released – stay posted!

The original article in Chinese is published here.